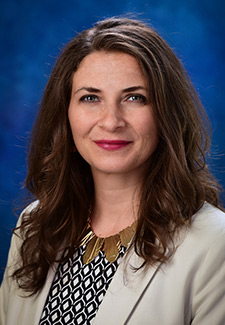 As a member of the Juniata College Class of 1997, Katie was thrilled to return to her alma mater in 2004 in the capacity of Admission Counselor. In June 2006 she was given the opportunity to join the Constituent Relations team to expand and develop the Parents and Affinity Programs. She now works primarily with major on-campus events, including Homecoming and Family Weekend in the Fall and Alumni Weekend in the Summer, and with the Parents Council.

As an undergraduate, Katie’s personal affinities centered on the arts, and she appeared numerous times on the Juniata stage as an actress and a member of the concert choir. In the classroom, Katie combined her academic interests in languages, theatre, and sociology, and pursued her dream to study abroad during her junior year at Philipps-Universität Marburg, Germany. Prior to accepting her position at Juniata College, Katie worked for Mellon Financial Corporation in Pittsburgh, PA, and as the Volunteer Coordinator for the Make-A-Wish Foundation of Louisiana in New Orleans.

Although currently living in Huntingdon, Katie is a native of Hollidaysburg, PA, where she met her husband, Will, in middle school. Will is a Professor of English at Juniata, and they have two young daughters, Rowan and Cora. Katie enjoys spending time with her family and friends, discovering new places, meeting new people, and dancing, singing and acting. On campus you can find her supporting the arts.