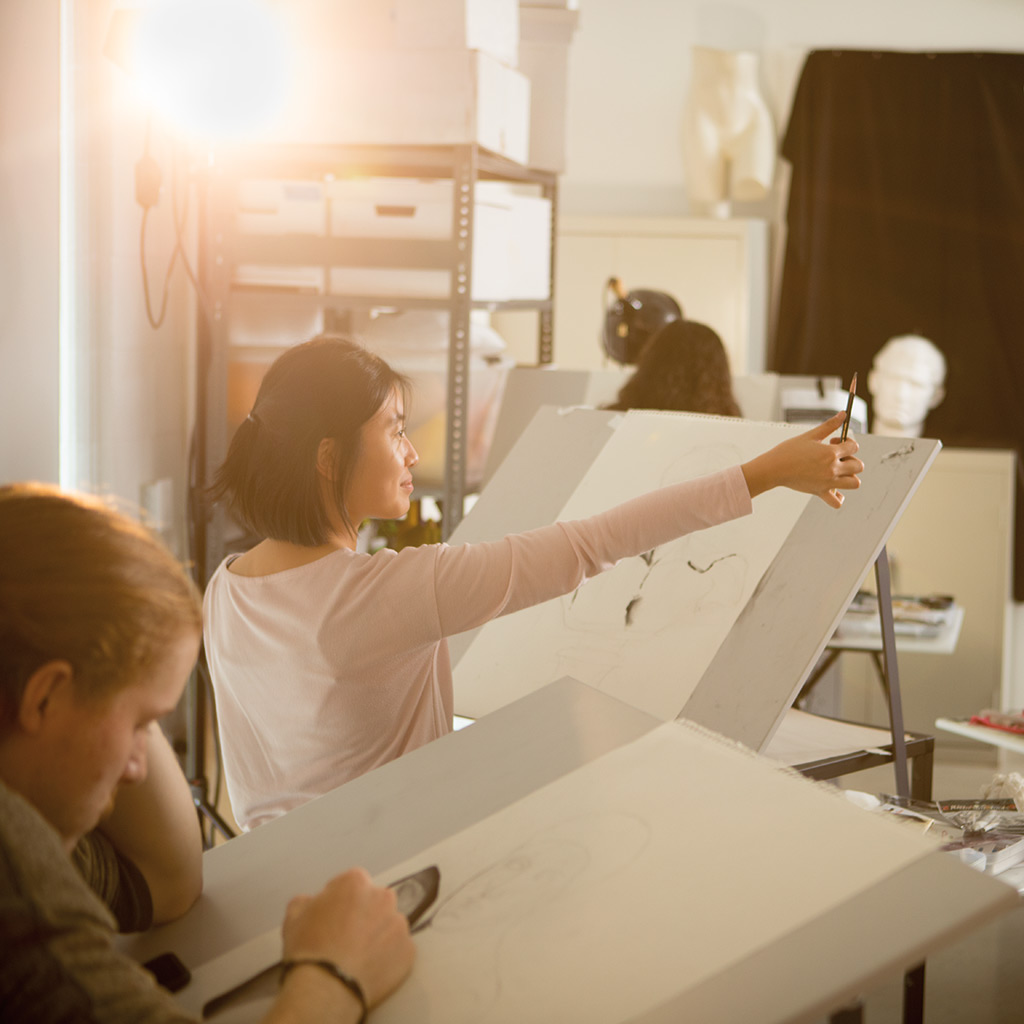 A New Home for the Arts on Campus

The Tom and Pat Kepple Integrated Media and Studio Arts Building is a hub of activity, a place where students can stretch their creative skills, challenge the boundaries of their abilities, and expand their vision for the future.

A New Home for the Arts on Campus

The Tom and Pat Kepple Integrated Media and Studio Arts Building is a hub of activity, a place where students can stretch their creative skills, challenge the boundaries of their abilities, and expand their vision for the future.

Through a $3.2 million donation during the early phase of the BELIEVE Campaign, John Dale ’54 of Moorestown, NJ, and his late wife, Irene Miller Dale ’58, saw an opportunity not only to fulfill a goal of the College’s master plan but to honor the contributions of Juniata College president emeritus Tom Kepple, who served in the position from 1998 to 2013, and his wife, Pat.

Kepple Hall was dedicated in October 2017, and the name of the two-story building was announced to the surprise of its namesakes.

At the dedication ceremony, the Kepples expressed their gratitude for the honor.

“(John) was determined to get this building done. Determined in a way that made this building possible. We wouldn’t be here today without his plan,” Tom Kepple says. “(The Dales) have been so instrumental, not just in this building, but to Juniata and the Kepple presidency, and I want to say thank you.”

“Not only was it a surprise that you put Tom’s name on the building, I was stunned that you put me on there too,” says Pat Kepple. “You didn’t have to add my name, but you did. I don’t even have the words to explain to you what that means to me.”

The Dales have been significant donors to the College since the mid-1990s, when John retired from a telecommunications firm called Dale, Gesek, McWilliams & Sheridan, co-founded in 1970 with colleague Rex McWilliams. The company, which was bought out by Comverse Inc. in 1995, developed telephone technologies that are still used in call forwarding, voice storage, and caller ID applications.

The Dales’ interest in funding the arts building came about in 2000, when John, then serving on Juniata’s Board of Trustees, was asked to be a representative from the board for a program review of the art department.

When conversations regarding the funding and future construction of the building began in earnest in 2013, John had three requests — that the facility be completed in his lifetime, that the design incorporates stone from Roaring Run Quarry (a business once owned by his father during the Depression), and that he and Irene retain naming rights of the new structure.

Through the Dales’ support of the arts and creative expression in the teaching and learning environment, Kepple Hall cultivates an atmosphere of inspiration. Students are challenged to develop ideas to solve problems in a space designed and equipped for learning traditional and digital arts.

“I cannot imagine my Juniata experience without Kepple Hall. That place has a special place in my heart — memories of spending some really great late-nights with friends finishing up our projects,” says Rohan Bandekar ’22. “Having a dedicated space for integrated media arts (IMA) allows the students in the field to belong to a tight-knit community. Kepple offers a space for IMA students, content creators, and artists alike to meet with one another, share ideas, and collaborate on projects together.” 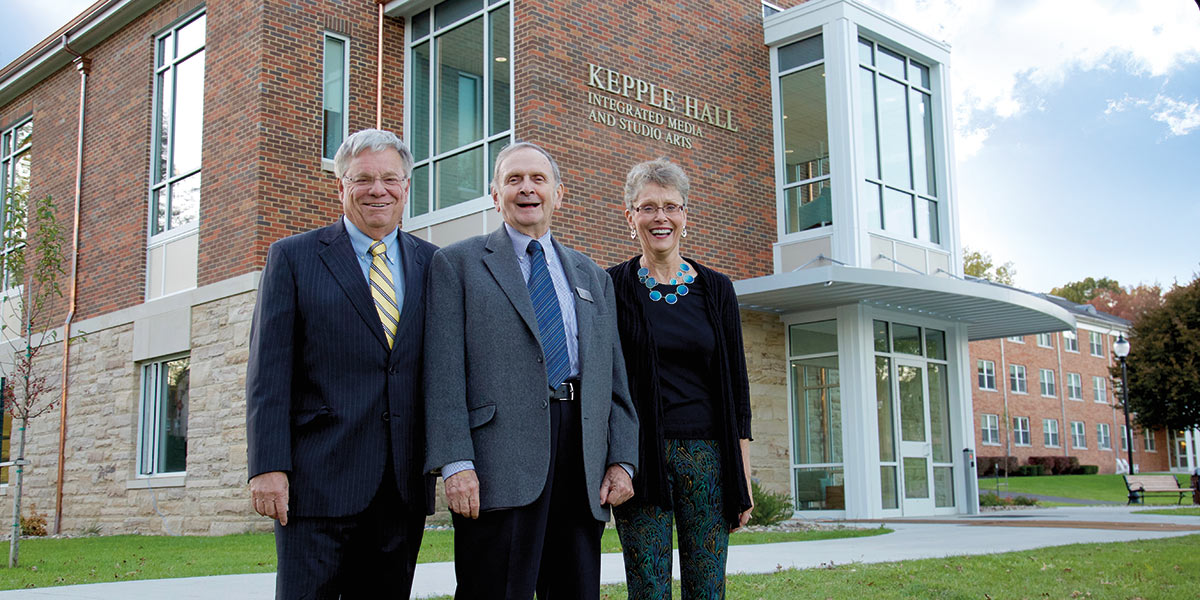 Through a $3.2 million donation during the early phase of the BELIEVE Campaign, John Dale ’54, center, saw an opportunity to honor the contributions of Juniata College president emeritus Tom Kepple, left, and his wife, Pat. Photo: Sarah Rohrer ’20

The addition of Kepple Hall has benefitted the entire community.

“We have thoroughly enjoyed our new home for the last few years,” said Ryan Gibboney, assistant professor of integrated media arts. “Now in our fifth academic year in Kepple Hall, I am excited and eager to make the most of our interdisciplinary spaces and continue to teach in our beautiful building.”

John and Irene have been great friends to Juniata through the years. Their philanthropy has reached across campus and changed the Juniata experience for generations of students. In addition to their gift for Kepple Hall, John and Irene donated more than $6 million to expand the college’s technology curriculum into information technology. They contributed funds to renovate the “C” wing of the Brumbaugh Academic Center to house faculty and classrooms for the business, IT, communication, and math departments into what is now a collaborative space known as Dale Hall. The Dales made gifts for the revitalization of Juniata’s “First Building,” Founders Hall and provided support for the Juniata Scholarship Fund each year.

“People say they are thankful that we have done this,” says John. “I’m very glad to be in a position to be able to do it.”

The Juniata College Museum of Art (JCMA) provides access to works of distinctive aesthetic quality to inspire, provoke creative and critical thought, and refresh the spirit.

Two members of the Juniata community have expanded the JCMA’s exhibit offerings and capacity through unique gifts in support of the arts.

Robert Wagoner, professor emeritus of philosophy, gifted an extensive collection of artwork to the JCMA which will significantly enhance the creative legacy available to both Juniata College and the wider community of Huntingdon.

Wagoner’s life-long appreciation of art inspired him to begin amassing his collection, which is predominantly composed of drawings, etchings, engravings, and lithographs. He began collecting art simply for the pleasure he found in doing so and found that his eye for quality improved with ongoing study and viewing.

“You learn a lot about yourself over 20 to 30 years of collecting,” Wagoner said. “As I collected more, I learned to look for things that were more challenging, pieces that had the power to grab my attention.” 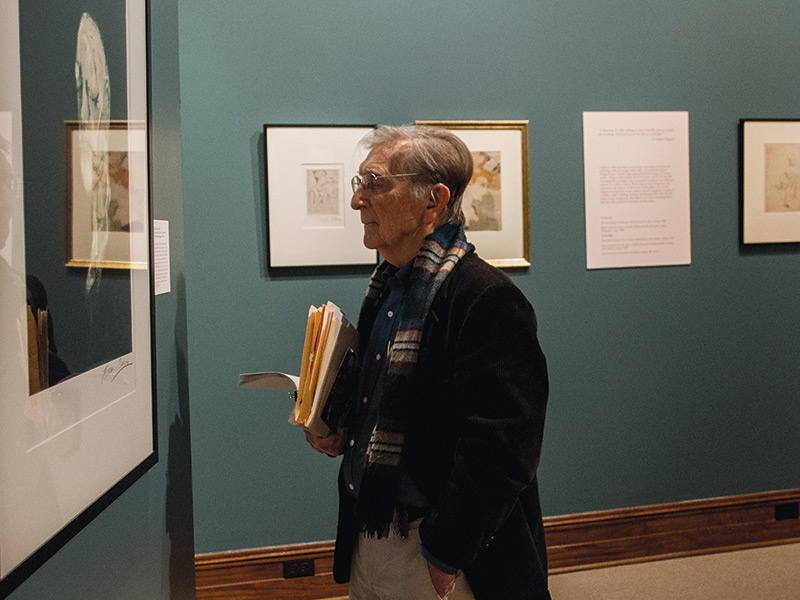 His collection, portions of which have already been exhibited at the JCMA, range in date from the 15th to the 20th century and feature artists including Rembrandt, Henri Matisse, Pablo Picasso, Henri Toulouse-Lautrec, and Edvard Munch. The pieces span centuries but are unified in their focus on the human face. Each piece represents echoes of poses or lines that transcend the differing artists and eras.

An archive expansion project supported by a gift from Juniata trustee and Kish Bank CEO Bill Hayes and his wife, Connie, will ensure that all of the priceless works of art, including those provided by Wagoner will be protected and preserved.

“It’s not only sharing an important art resource with the community, it really represents the celebration of a wonderful architectural jewel on the Juniata campus,” said Bill Hayes.

The couple decided to donate to Juniata’s museum in memory of their son, William Parker Hayes Jr., who was passionate about history and museum studies.

Key to the museum restoration project is the concept of open storage. The museum’s collections will not only be visible, but accessible, providing new opportunities for students within this important teaching space.

Improvements to the 1907 Beaux-Arts structure were completed in the summer of 2021. Originally constructed as a Carnegie Library, the building was converted to house the JCMA in 1998 and is now home to a unique and growing collection for generations of visitors to enjoy.