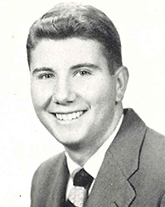 From the moment George Cruser began his studies at Juniata, his love for the College was clear. He earned his degree in 1952 and went on to receive his master’s of business administration degree from the Wharton School at the University of Pennsylvania in 1954.

Mr. Cruiser served on the board of trustees at Juniata College for many years and was held in high esteem as a trustee emeritus. He and his wife, Susan, were lead contributors in the effort to construct the Kepple Hall Integrated Media Arts Building. The couple also founded the George E. ’52 and Susan W. Cruser Endowed Scholarship.

George Edwin Cruser of New Hope, Pa., passed away peacefully on October 12, 2020, in Warminster, Pa., after visiting with all four of his children and his loving wife.

George was the dedicated and caring husband of Susan Wilson Cruser “Sue.” The couple would have celebrated their 60th wedding anniversary on May 27, 2021.

Born December 26th, 1930 in Princeton, N.J., George was the oldest child of the late Elva Gilpin Cruser and Joseph S. Cruser of Princeton, NJ. George's only sister is the late Joyce Cykosky of Greentown, Pa.

George received a Bachelor of Science from Juniata College in 1952 and received a Master of Business Administration from the Wharton School at the University of Pennsylvania in 1954. After school, he proudly served the United States in the U.S. Army during the Korean War.

George went to work for the West Virginia Pulp and Paper Company, later Westvaco Corporation, in 1960 and retired in 1996. He commuted by train from Trenton to New York City for 36 years. He started as a credit analyst and retired as the chief financial officer and member of the board.

George and his family moved in 1973 to an historic home with 32 acres in Upper Makefield Township. When he was not working in the “city,” he had the peace of the “country” where he enjoyed raising his family, tending to his beautiful property, and woodworking. George was also an avid hunter and fisherman.

After retirement, George and Sue traveled extensively to see both the world and enjoy their grandchildren and their activities in Georgia, Maryland, Pennsylvania, and Texas. At home, they enjoyed antique collecting, especially clocks, and they rarely missed a Phillies or Eagles game on television.

In addition to his wife Sue, George will be missed by his four children, George Edwin Cruser, Jr., J. Robb Cruser, Susan Cruser Holliday, and Richard Vaux Cruser, and by 12 wonderful grandchildren.