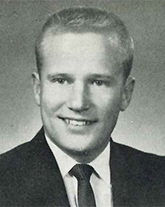 A veteran, a civic leader, and a community servant, William Martin began his studies at Juniata College as an adult following his discharge from the United States Navy following his service during the Korean War. He earned a bachelor’s degree in economics in 1959, and returned to the College as the Director of Alumni Relations and Placement in 1962.

He remained an active member of Juniata’s Alumni Council throughout his life.

Mr. Martin left the area in 1966, when he pursued his master’s degree at Hofstra University in Hempstead, N.Y. His career path led him to return to Juniata in 1976, this time as the Assistant Dean of Student Services. During his 19 year career, Mr. Martin developed and implemented a full Career Planning and Placement Library that now contains over 350 books, initiated a bi-annual Career Fair that affords students the opportunity to talk to alumni about their job experiences, designed a college profile book that is sent to over 250 prospective employers, and established an effective part-time off-campus employment activity with local industries. He also implemented a series of seminars on job seeking strategies, resume writing and interviews. Mr. Martin retired in 1995.

William “Whitey” Burgard Martin, 92, of Huntingdon, went to be with his parents and friends at 8:51 a.m. Wednesday, October 21, 2020, at The Oaks at Westminster Woods, Huntingdon.

Born December 6, 1927 in Pottsville, PA, he was a son of the late Roy and Martha (Burgard) Martin. He was united in marriage to the former Susan Bennett on August 9, 1975, in Park Ridge, Illinois.

In addition to his wife, he is survived by a son, W. David Martin.

He attended the Stone Church of the Brethren, Huntingdon.

Outside of his professional affiliations, Mr. Martin served as a past regional secretary of the Central Pennsylvania Jaycees, and was a recipient of the Outstanding Jaycee Award. He was a member and a past President of the Rotary Club of Huntingdon and the Huntingdon Tourist Promotion Agency. He served as a past District Commissioner of the Juniata Valley Council, Boy Scouts of America; and was a member of the Frank P. Hommon Post #24, American Legion, Huntingdon, where he was also a past Commander. He was also an Executive Committee Member of Huntingdon County Business and Industry; served as a Trustee to the Huntingdon Area High School Alumni Association; and was a member of the Huntingdon Community Center Board of Directors. In addition, he was an active member and past Exalted Ruler of the B.P.O.E. Lodge #976, Huntingdon, served as the Activities Chair of the Elks-North Central District, and held the positions of past State Association Chair and District Secretary of the Pennsylvania Elks. He was also listed twice in Marquis “Who’s Who in The East.”

He attended Huntingdon public schools and was a 1947 graduate of Huntingdon High School. After his discharge from the U.S. Navy, he enrolled at Juniata College, Huntingdon, in 1955, where he obtained his Bachelor of Science Degree in Economics in 1959. Subsequently, he enrolled at Hofstra University, Hempstead, NY, in 1967, and received a Master of Arts in Personnel Administration/Counseling in 1968.

After his graduation from Juniata College in 1959, he became employed at Sears Roebuck & Company, Abington, where he held the position as personnel manager of a “Class A” Store until 1962. In 1962, he began working at Juniata College, Huntingdon, as the Director of Alumni Relations and Placement until 1966, when he returned to school at Hofstra University, Hempstead, NY, and became employed as their Director of Placement until 1969. He then moved to Chicago, IL, where he was hired by the former Coopers & Lybrand International Firm of Certified Public Accountants as a National Director of Recruiting until 1976. During his time there, he developed the firm’s first national recruiting manual, implemented the firm’s first national recruiter’s workshop, was involved in the development of the firm’s award-winning recruiting brochure, “Exit the Green Eyeshade,” and played an integral role in the development of the firm’s first consolidated national recruiting effort. In 1976, he returned to Huntingdon and became employed at Juniata College where he obtained the position of Assistant Dean of Student Services, retiring in 1995 after 19 years of service.

Mr. Martin was also honored on his 80th birthday by the former Mayor of Huntingdon, Foster G. Ulrich, Jr., who proclaimed December 6, 2007, as “William B. ‘Whitey’ Martin Day” due to his attendance and graduation from Huntingdon High School, dedicated service to the U.S. Navy in both W.W.II and Korea, and his extensive service to the Huntingdon community.