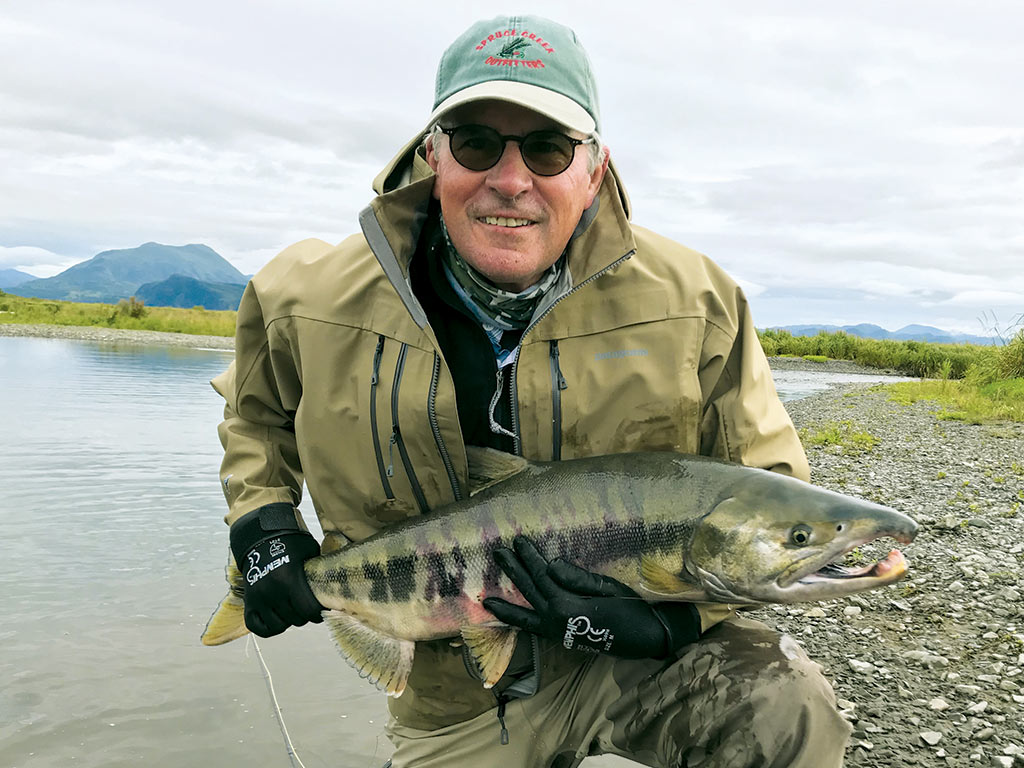 In his debut novel, A Stream to Follow, Dr. Jesse Wright ’65 draws upon experiences gleaned from an impressive career in psychiatry, a love of fly fishing, and an interest in human nature to weave a compelling tale of one man’s journey in processing the trauma suffered as a front-line surgeon during World War II.

Originally from Hollidaysburg, Pa., which inspires the book’s setting, Jesse followed in his grandfather’s footsteps to attend Juniata College. The decision proved life-changing for many reasons, not the least of which was meeting his wife, Susanne (Judy) Wright ’65, on his first day on campus.

“The liberal arts environment was terrific. So many courses helped prepare me for the future, like philosophy, arts, and music,” Jesse said.

After graduating from Juniata, Jesse studied at Jefferson Medical College.

“I set off to be a surgeon, but when I did a rotation in psychiatry I was fascinated,” he said. “There was little known about effective treatments.”

Now a professor, vice chair of academic affairs, and director of the Depression Center at the University of Louisville, Jesse was mentored by Dr. Aaron Beck, widely known as the “Father of Cognitive Behavioral Therapy (CBT).” He began to implement CBT into his practice in 1979.

“We know a lot about how to treat people, help them gradually face traumas, and get past their emotional wounds,” he said. “They are fellow travelers and can collaborate in the work. I think a life in psychiatry lends itself to you understanding people and wanting to help them.”

His research in the field is focused on developing and testing computer-assisted psychotherapy methods for improving the efficiency of treatment and enhancing the psychotherapeutic experience. Jesse’s projects have been funded through multiple grants from the National Institutes of Health (NIH). He is the principal investigator of a NIH-sponsored study of computer-assisted CBT for depression in primary care. He has authored several books and textbooks.

“I’ve written a lot of non-fiction, including one book written with my daughter, Laura. This first work of fiction is a new chapter for me,” he said.

Jesse and Susanne’s children, Dr. Andrew Wright and Dr. Laura McCray, have found their life’s work in medicine as well. The family enjoys spending time together, visiting the home Jesse maintains in Hollidaysburg.

Drawing from his memories of his father and his uncle, both veterans of World War II, the novel follows a fictional battlefront surgeon, Bruce Duncan, who has returned to his small hometown in Pennsylvania.

“My dad and uncle were very much in the mold of men in those days,” Jesse said. “They just stuffed it inside.”

Much like Jesse’s father and uncle, Bruce looks forward to a restoration of “normal” life. He plans to open a general practice, spend his spare time fly fishing, and forget the past.

“He received a crash course in becoming a trauma surgeon, and back then, treatment was done right at the front lines,” he said. “In World War II, it was called combat fatigue. Bruce comes back from the war emotionally wounded.”

To learn more about the experiences of those delivering emergency medical care on the front lines of World War II, Jesse delved into existing records, including The Other Side of Time: A Combat Surgeon in World War II by Brendan Phibbs.

“My character is not based on a real person, and it took me a while to come up with the concept,” Jesse said, adding he found first-hand and fictionalized accounts relating the experience to be quite rare.

His character, Bruce, continues to be haunted by the images of the soldiers he tried to save, even in the safety of central Pennsylvania.

“New battles begin to consume him quickly, but these new challenges help him fight his way back to wellness and healing,” Jesse said.

Even fly fishing, a favorite pastime Bruce shares with the author, evokes flashbacks to a battlefront stream in Europe where indelible images of death and destruction remain in his mind.

“It can be a meditative process, coming to grips with oneself and to work within one’s mind and feelings,” Jesse said. “Being a fly fisherman, I was able to resonate with what it’s like to be out by yourself along the water. There are some good things that can happen spending time along a stream.”

The novel’s title, A Stream to Follow, is metaphorical for the work Jesse has done in his practice to help those whose lives have been shattered through trauma to find a path forward and commit to a life of action.

“Psychiatry has been the place for me. It’s been a wonderful career. It keeps me going strong, and there is still a lot to learn and a lot to do,” he said. “The liberal arts education I received at Juniata influenced that, and I’m eternally grateful.”