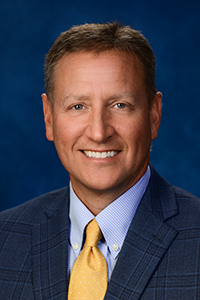 Troha brought to Juniata more than two decades of leadership experience from work in higher education with a commitment to build upon Juniata’s strong focus on student learning in a community-oriented atmosphere.

Successes under his leadership include:

Troha has led Juniata to pursue alignment and influence with national organizations that reflect the College’s values. Under Troha’s leadership, Juniata has joined the Pennsylvania Consortium for the Liberal Arts, where he previously served as chair, as well as the American Talent Initiative. Troha is former chair of the board of the Association of Independent Colleges and Universities of Pennsylvania and is a board member of the National Association of Independent Colleges and Universities. Additionally, Troha is the former chair of the Landmark Conference, the intercollegiate athletic conference affiliated with NCAA's Division III, and is the current vice chair of the NCAA Division III President’s Council.

A native of Cleveland, Ohio, Troha earned a bachelor’s degree in criminal justice and a master’s degree in counseling, both from Edinboro University, in Edinboro, Pa. In 2005, he earned a Ph.D. in educational policy and leadership from the University of Kansas in Lawrence, Kan.