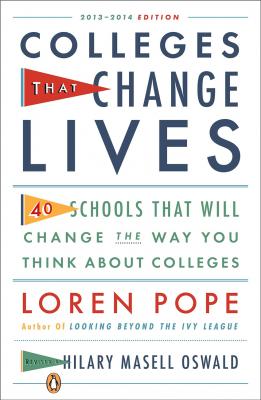 HUNTINGDON, Pa. -- Juniata College has again been included in the completely revised and updated edition of "Colleges That Change Lives," a seminal college guide originally written by the late Loren Pope, former education editor for the New York Times.

Juniata is one of 40 colleges and universities profiled in the book, which was originally written in 1996. After Loren Pope's death in 2008, journalist and editor Hilary Masell Oswald embarked on a total revision of Pope's original book. She conducted new school tours, conducted in-depth interviews with students, professors and administrators.

The author highlights Juniata's alumni, hands-on learning, internships and liberal arts curriculum. One student is quoted saying, "People want to do well here. I don't think there are any students who are bored or not paying attention. I just don't know anyone who isn't excited about what they're learning."

The college's commitment to study-abroad programs also are recognized, along with the education, business and theatre departments, which are given special mention.
The author writes "It's no surprise that Juniata students express hope and eagerness when they talk about their future. 'It feels like the whole school is set up just to make sure we succeed,' says one senior from New Jersey."


One student is quoted saying, "People want to do well here. I don't think there are any students who are bored or not paying attention. I just don't know anyone who isn't excited about what they're learning."

Oswald also includes a new chapter on how students with learning disabilities can find colleges and universities that meet their needs.

--The look and feel of the campus.

--The quality of dining hall food and other food services.

--The percentage of students from each campus that study abroad.

--The percentage of students from each campus that go to graduate school.

--Comments from professors at each college.

Four new Colleges have been added to the list: Hillsdale College, in Hillsdale, Mich.; St. Mary's College, in Moraga, Calif.; University of Puget Sound, in Tacoma, Wash.; and Willamette University, in Salem, Ore.

Four colleges from the previous edition did not make the list: Antioch College, in Yellow Springs, Ohio; The Evergreen State College, in Olympia, Washington; Hampshire College, in Amherst, Mass.; and Hiram College, in Hiram, Ohio.