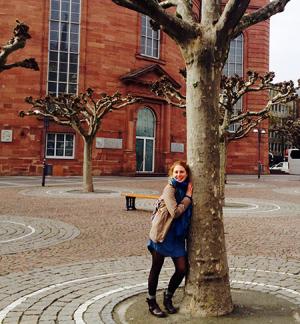 HUNTINGDON, Pa. -- Nikea Ulrich, a senior from Homer, N.Y. studying biology and German, received the Barry M. Goldwater Scholarship, which is chosen based on academic merit in mathematics, science and engineering.

Ulrich received the award based on a research proposal to study the effects of hydraulic fracturing on aquatic microbial communities in stream ecosystems using metagenomic, metatrascriptomic and cell sequencing at Juniata college. She was chosen from a field of more than 1,000 students from hundreds of colleges and universities nationwide.

Ulrich is the daughter of James Ulrich and Elaine Norris, also of Homer. She is a 2013 graduate of Homer Central High School.

"I am truly honored by this award; it reflects magnificently on the opportunities that Juniata provides for its students to be successful in whatever they want to pursue, " Ulrich says. "This Goldwater research opportunity certainly is helping me continue to follow my aspirations to conduct microbiological research within the interdisciplinary field of astrobiology."

The Goldwater Foundation is a federally endowed agency established by Public Law 99-661 in 1986. The scholarship program honoring the late Sen. Barry M. Goldwater was designed to foster and encourage outstanding students to pursue careers in mathematics, natural sciences and engineering.

"Juniata has provided such an amazing, encouraging learning environment. My course work is totally interwoven with peer collaboration and laboratory experience, and faculty mentorship has supported, guided, and inspired me in every step. I am grateful for all of it."

The Goldwater came after Ulrich received the German Academic Exchange Service's (DAAD) undergraduate/graduate scholarship in November 2014 to fund a spring semester 2016 study-abroad experience at Philipps University, in Marburg, Germany. She also received an Honorable Mention in last year's Goldwater Scholarship competition. She is currently studying at Philipps University, near Frankfurt.

She studied abroad previously as an Eagles Abroad Fellow when she studied German for five weeks at Kapito Sprachschule in Muenster, Germany.

Ulrich has amassed an impressive record of research projects during her college career. In 2014, Ulrich started working with Regina Lamendella, assistant professor of biology, on two projects exploring how hydraulic fracturing affects the aquatic microbial communities around fracking sites and within the fluid used in the fracking process. She is also recently published in the journal Applied and Environmental Microbiology as first author on another project with Dr. Lamendella that traced how the bacterial community in a small creek changes over the duration of a major storm.

"Juniata has provided such an amazing, encouraging learning environment," she says. "My course work is totally interwoven with peer collaboration and laboratory experience, and faculty mentorship has supported, guided, and inspired me in every step. I am grateful for all of it."

In addition to performing research, Ulrich has traveled to several professional conferences to present her research, including the 2015 national meeting for the American Society of Microbiologists in New Orleans, La., where she received the Outstanding Student Presentation Award. She also presented her research at a regional ASM meeting at Lycoming College, the Landmark Symposium at Goucher College, and Juniata's Liberal Arts Symposium. She plans to present her research at the 2016 International Society of Microbial Ecology Symposia in August held in Montreal, Canada.

She remains active on campus, playing the clarinet in the college's Wind Symphony and competed on Juniata's softball team during her freshman year and part of her sophomore season. She is a member of the ASM Club, the German Club and the Astronomy Club. She is vice president of
Tri-Beta, the national honor society for biology.