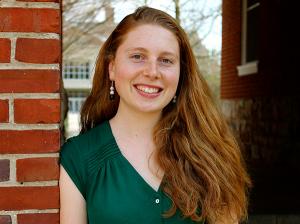 HUNTINGDON, Pa. -- Nikea Ulrich, a senior from Homer, N.Y. studying biology and German at Juniata College, has been named a Fulbright Fellow for the upcoming 2017-2018 academic year and will conduct research in the Institute of Space Medicine at the German Aerospace Center in Cologne, Germany,.

Ulrich is the daughter of James Ulrich and Elaine Norris, also of Homer. She is a 2013 graduate of Homer Central High School.

In the Space Microbiology Lab, led by microbiologist Ralph Moeller, she will extract RNA and DNA from microbes recovered from continental Antarctica to determine potential mechanisms of survivability in space. After her Fulbright year, Ulrich will pursue a doctoral degree in microbial ecology at the University of Montana, in Missoula, Mont.

Last year, Ulrich received the German Academic Exchange Service’s (DAAD) undergraduate/graduate scholarship to fund a spring semester 2016 study-abroad experience at Philipps University, in Marburg, Germany. During her time there, she was able to join a research team at the nearby Max Planck Institute for Terrestrial Microbiology, where she worked on a project isolating a bacterium in a termite gut.

After her study abroad experience, Ulrich was selected to become a DAAD Young Ambassador. She also studied abroad previously as an Eagles Abroad Fellow when she studied German for five weeks at Kapito Sprachschule in Muenster, Germany.

"I have always felt like the possibilities at Juniata are limitless."

During her four-year college career, Ulrich amassed an impressive record of research projects. In 2014, Ulrich started working with Regina Lamendella, associate professor of biology, on two projects exploring how hydraulic fracturing affects the aquatic microbial communities around fracking sites and within the fluid used in the fracking process. She also worked with Lamendella on another project tracing how the bacterial community near a small creek changes over the duration of a major storm. She published her storm research in the journal Applied and Environmental Microbiology

During the 20116-2017 academic year she is finishing her research and senior thesis on fracking and will present her research at Juniata’s Liberal Arts Symposium April 20. In summer 2016, Ulrich also presented a poster on her fracking research at the annual International Society for Microbial Ecology meeting in Montreal, Canada

She received a Howard Hughes Medical Institute fellowship to pursue research in summer 2014 and received an American Society of Microbiology Undergraduate Research Fellowship in summer 2015, also to support research. She received a National Science Foundation-sponsored S-STEM scholarship as well. In 2014, she received an Honorable Mention for the Barry M. Goldwater Scholarship, and then received the award the following year.

“I have always felt like the possibilities at Juniata are limitless,” says Ulrich. “Juniata faculty have challenged and supported me every step of the way, and I am so grateful. The close relationships fostered between faculty and students are unique -- which allows faculty to see each student as a whole person and provided me the opportunity to exceed anything I could have imagined just a few years ago.”

Ulrich has traveled to several other professional conferences to present her research, including the 2015 national meeting for the American Society of Microbiologists in New Orleans, La., where she received the Outstanding Student Presentation Award. She also presented her research at a regional ASM meeting at Lycoming College, the Landmark Symposium at Goucher College.

Ulrich remains active on campus, playing the clarinet in the college’s Wind Symphony. She is a member of the Globalization Alliance Club and German Club. She is also president of the American Society for Microbiology chapter at Juniata and vice president of Tri-Beta, the national biological honor society.