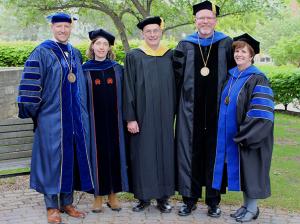 HUNTINGDON, Pa. -- Three Juniata College faculty members were honored Tuesday, May 2, with distinguished teaching and service awards during the College’s Spring Awards Convocation in Rosenberger Auditorium in the Halbritter Center for the Performing Arts, held Tuesday at 3 p.m. Honored for their work were Jerry Kruse, Dale Professor in Information Technology, Computer Science and Mathematics, and assistant provost; William Thomas, professor of information technology; and Amy Frazier-Yoder, associate professor of Spanish.

The convocation was held in Rosenberger Auditorium in the Halbritter Center for the Performing Arts. The convocation address was given by Jay Hosler, professor of biology.

Jerry Kruse joined the Juniata faculty in 1999 as an assistant professor after a productive career in the private sector. In addition to his duties as the John ’54 and Irene ’58 Dale Endowed Professorship in Information Technology, Computer Science, and Mathematics, he has served as assistant provost since 2013.

“Jerry Kruse has been a leader in the college’s effort to assess the effectiveness of its teaching, its curriculum and has helped bring a ‘culture of assessment’ at Juniata,” says James A. Troha, president of Juniata. “He has brought organization and growth to the Liberal Arts Symposium and has become the college’s point person for academic integrity.”

Kruse began his interest in course assessment early, attending several Collegiate Learning Assessment workshops, and applying the lessons learned there to several of his own courses. In 2011, he was named a Teagle Teaching and Learning Scholar as part of the Council for Aid to Education’s Collegiate Learning Assessment Project. Later, he served as director of the Lakso Center for Teaching and Learning during the 2012-2013 academic year. He continues to serve on the board of directors for the Lakso Center.

More recently, as assistant provost, Kruse was one of the leaders in Juniata’s efforts to assess its general education curriculum and oversees Juniata’s academic integrity program. He also organized Juniata’s Liberal Arts Symposium from 2012 to 2016.

Kruse also remains involved in Juniata’s international education efforts, serving on the International Education Committee and traveling abroad to teach at Fachhochschulle Muenster for summer and winter break short courses and teaching there during a sabbatical semester.

Kruse earned a bachelor’s degree in 1985 in computer science from the University of Illinois and went on to earn a master’s degree in 1993 and a doctorate in 1997 in applied mathematics, both from Brown University. He is a member of numerous honor societies including Sigma Xi, Tau Beta Pi, Golden Key, and Phi Eta Sigma. He was promoted to associate professor in 2005 and earned a promotion to full professor in 2011.

Before starting his career in higher education, Kruse served as software engineer for Compaq Computer Corporation. He also worked for the DuPont Company in such positions as database administrator, information center analyst, and data center supervisor.

Kruse received the 2011 Award for Distinguished College or University Teaching of Mathematics from the Allegheny Mountain Section of the Mathematical Association of America.              William Thomas, who joined the Juniata faculty in 2001, did not start his career in higher education, beginning his work career as a computer programmer in the private sector.

“Bill Thomas is an extraordinarily student-centered educator who teaches the “signature’ courses in Juniata’s IT program,” says Troha. “Many students attribute their jobs and careers to these three courses, Information Technology Systems, Security Engineering, and Innovations for Industry, all taught by Bill.”

Thomas has been instrumental in redesigning parts of the information technology curriculum, particularly in reimagining the Innovations for Industry course into a three-part capstone experience that transitions students from team members to technical implementation to leadership positions. He also designed Information Technology Systems, a sophomore-level course that offers a detailed introduction to database management, networks and web design. By introducing these concepts in a single course, IT students can explore more in-depth databases, networks and web design as they take upper-level courses.

Thomas teaches Juniata’s courses in security engineering, software engineering,  web design and IT systems, as well as Innovations for Industry, which he co-teaches with Marlene Burkhardt, professor of business and IT.

He started his career in the business world, as a programmer/analyst at AMP Inc., in Harrisburg, Pa., from 1984 to 1989. From 1989 to 1996, Thomas worked as senior analyst for Hoffman Mills in Shippensburg, Pa., where he was responsible for network design, administration, support and maintenance.

He has supported Juniata’s unique brand of liberal arts education with the “ultimate accolade:” all four of his children graduated from Juniata.

Amy Frazier-Yoder, a native of Huntingdon, arrived at Juniata in 2009 as an instructor in Spanish. She earned a bachelor’s degree in Spanish and journalism in 1999 from Washington & Lee University, in Lexington, Va. She went on to earn a master’s degree in Spanish literature in 2004 and a doctorate in 2009 from the University of Virginia. She was promoted to assistant professor in 2010 and was promoted to associate professor in 2016.

She worked as a journalist between 1999 and 2002, first at the News & Advance in Lynchburg, Virginia, and later at the Winston-Salem Journal.

Prior to coming to Juniata, she was an instructor at the University of Virginia from 2008-2009, where she taught Spanish-American literature courses and designed the course Spanish for Health Care Professionals. In addition, she served for four years as administrator, instructor, and activities director for the University of Virginia’s international language program in Lima, Peru.

Her research interests largely focus on 20th century Latin American fiction. She is particularly interested in the Argentine writer Jorge Luis Borges; she has published two articles in Variaciones Borges on his works.

Frazier-Yoder focuses her research and teaching on self-conscious fiction, also known as metafiction, gender constructs in Hispanic fiction and the intersection of poetry and popular culture.

She is a member of the American Association of University Women.