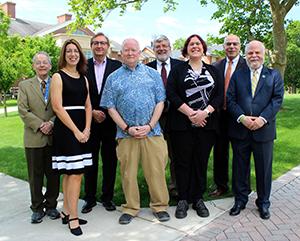 Howard Nathan, a native of Johnstown, Pa. and a 1975 Juniata graduate, has been president and chief executive officer of Gift of Life Donor Program (formally Delaware Valley Transplant Program) since 1984. The program is the largest, and one of the oldest of the 58 organ procurement organizations in the United States. As CEO, he oversees all clinical and administrative duties for the organization which provides all vital organs and tissues for 15 transplant centers and employs more than 200 professionals. He manages the $75 million budget of the organization, which has coordinated more than 42,000 organs for transplantation and hundreds of thousands of tissue transplants since 1974.  Gift of Life has 41 organ-specific programs and 131 donor hospitals in its region.

Nathan was elected to the board of directors for the United Network for Organ Sharing (UNOS) for three terms and served as treasurer. He also is a past president of the Association of Organ Procurement Organizations (AOPO), Donate Life America and the International Society for Organ Donation and Procurement (ISODP).  He is a member of the board of directors for the Pennsylvania Governor’s Organ Donation Advisory Committee, the National Disease Research Interchange (NDRI), LifeLogics Inc. and the Musculoskeletal Transplant Foundation Governing Board and Donation Board of Trustees.

He began his career in organ donation in 1978 as a transplant coordinator for Delaware Valley Transplant Program. He worked before that as a research specialist at the Wistar Institute from 1975 to 1977. He began studying public health as a graduate student in 1978 at the University of Pittsburgh.

Nathan is also the president of the Transplant Foundation; the founder and president of the Gift of Life Institute, an international research and training center for donation and transplantation professionals established in 2004; and the president of the Gift of Life Family House.  Nathan is considered a leading authority on organ and tissue donation, and is a regular  presenter at national and international organ and tissue procurement and transplantation conferences and has published more than 350 scientific papers and abstracts. He also traveled to 17 countries including Argentina, Australia, Brazil, China, Germany, India, Japan, the Republic of Korea and Saudi Arabia to promote best practices in organ donation and transplantation.

Nathan is frequently consulted by members of the media and has appeared on national TV news and talk shows. He has received numerous outstanding achievement awards from national organizations.

Nathan is an active volunteer for Juniata. He has volunteered at regional alumni events in the Philadelphia area, has served as a Juniata Admissions Ambassador and participated in Juniata job-shadowing programs for health professions students.

Dr. Michael Johnston, a native of Harrisburg, Pa., has 30 years of experience in anesthesiology and has been affiliated with Kauai Medical Clinic in Hawaii since 1990. He earned a bachelor’s degree in biology from Juniata in 1977 and went on to earn his medical degree at Temple University in 1981.

Dr. Johnston has made more than 25 mission medical trips with Rotoplast International, a nonprofit organization that treats children with cleft lips and palates, to China, Peru, the Philippines, Venezuela, Vietnam, Myanmar, Bangladesh, India, Egypt, Ethiopia, Liberia and Togo. He has operated on nearly 2,500 children during his service to Rotoplast International. He has been making the medical mission trips since 2001.

Dr. Johnston started his medical career as an intern in Lancaster General Hospital in Pennsylvania and served as a doctor in the National Health Service Corp. from 1982 to 1987 at Lee County Community Hospital in Pennington Gap, Va. He served his residency in anesthesia from 1987 to 1990 at the University of Vermont.

He received the Great Humanitarian Award from the Rotary Club of Poipu Beach in 2006 and was named to the board of directors for Rotoplast International in 2012.

Karen Beck, a native of Westmont, N.J., and graduate of Juniata, earned a bachelor’s degree in German and international marketing in 1993. She is controller at Logan Capital Management, an investment advisory company based in Ardmore, Pa.

Beck started her career at Logan Capital in 1998 and became operations manager in 2004. She was promoted to controller in 2008.

She has been extraordinarily involved as a volunteer for Juniata. Since graduation, she has worked as an admission volunteer and has served as chair of the group Juniata Admission Ambassadors since 2008 and served as co-chair prior to 2008.

She was also a member of the Juniata Career Team from 1993 to 1997, and served on the college’s Alumni Council from 1998 to 2001. She has been a member of the Delaware Valley Alumni Club Leadership Team since 2010 and is on the Class of ’93 reunion committee.

Elena Long, a 2006 graduate of Juniata and a native of Cressona, Pa., has been a postdoctoral research associate in the University of New Hampshire’s Nuclear Physics Group since 2013. She will be promoted to assistant professor Aug. 21. She is involved in the university’s polarized target spin structure research program. Her research focuses on the internal structure of nucleons.

She previously worked as a graduate student researcher at Kent State University and the Thomas Jefferson National Accelerator Facility in Newport News, Va. She also worked as an adjunct professor at Thomas Nelson Community College in Hampton, Va.

Long recently received the 2017 Kidder Award from the University of New Hampshire, one of the university’s highest LBGT-related honors. She received the oSTEM National STEM Service Award in 2014 and was named JSA Promising Young Scientist the same year. She was nominated in 2011 for membership to the Golden Key International Honor Society.

She has been active in her support for Juniata, returning to speak frequently and volunteering for alumni-related affinity group activities. She received the Juniata College Office of Diversity and Inclusion Award of Recognition for Alumni Advocacy in 2016.

She was elected to the Users Group board of directors at the Thomas Jefferson lab to represent postdoctoral researchers in the facility. She also founded LGBT+Physicists in 2009. Long recently stepped down as vice president of diversity and inclusion for oSTEM Inc.

Long served as an executive committee member on the American Physical Society’s ad-hoc committee on LGBT issues from 2014 to 2016. She was the postdoctoral representative on the President’s Committee on the Status of LGBT Issues and the Transgender Policy and Climate Committee at the University of New Hampshire.

She was a member of the American Physical Society since 2009, and presented her academic research at conferences and professional meetings across the U.S.