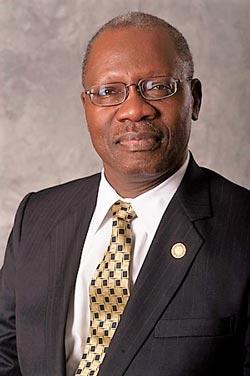 Huntingdon, Pa. -- Maurice C. Taylor, vice president for academic outreach and engagement at Morgan State University and a 1972 graduate of Juniata College, will receive an honorary doctor of humane letters degree and deliver the commencement address at Juniata’s 140th commencement ceremony at 10 a.m., Saturday, May 19 on the Juniata campus.

Taylor has spent the majority of his professional career as an academic leader at Morgan State University, a doctoral research institution that provides instruction to a multiethnic, multiracial, multinational student body. Founded in 1876, Morgan State is among the nation's most diverse Historically Black Colleges and Universities.

“I have had the privilege of Dr. Taylor’s counsel throughout my time at Juniata,” says James A. Troha, president of Juniata College. “Having served for more than two decades on Juniata’s Board of Trustees, and in a variety of civic and academic roles to draw the best out of organizations and institutions, Maurice has thoughtful and nuanced advice to share. I look forward to what he has to say and am delighted that the College is conferring this honor on him.”

In addition to his distinguished record in higher education, Taylor has volunteered with professional, civic, and charitable organizations locally and nationally.

“I am honored to be recognized by my alma mater with this honorary degree,” Taylor says. “I feel the weight that comes with having to address Juniata College's class of 2018 graduates about the great and small things they are expected to achieve in order to form a more perfect union.”

For 21 years, Taylor was a member of the Juniata College Board of Trustees, his last term ending in 2014. During his board terms, he chaired its Committee on Education and Student Life, was a member of the executive committee of the board, and served on the Committee on Business Affairs as well. In 2017, Taylor established the endowed Dr. Maurice C. Taylor ’72 Lectureship on Social Justice with a personal gift to the College.

From 2003 to 2007, Taylor was president of the Council of Historically Black Graduate Schools, an organization he served from 2001 to the end of his term as president. He is also a past chair of the Graduate Record Examination (GRE) board. Taylor has published an Introduction to Sociology textbook, numerous articles in professional journals, and chapters in a variety of other texts. As a football standout at Juniata, he also earned Academic All-American honors.