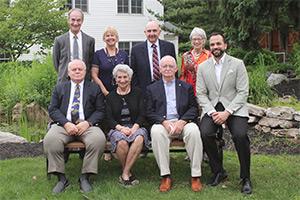 Dr. Barry B. Moore, a 1963 graduate of Juniata, received the College’s Alumni Achievement Award, which honors an alumnus/a who has distinguished him/herself over a period of years and who has achieved a pinnacle position in his/her chosen profession. After graduating from Juniata, Dr. Moore attended Temple University School of Medicine, where he was inducted into both the Alpha Omega Alpha Honor Society and the Babcock Surgical Society. He then completed a surgical internship at the Cincinnati General Hospital and fulfilled his residency in neurosurgery at the Mayo Clinic in Rochester, Minn.

After his work at the Mayo Clinic, Dr. Moore entered private practice in Harrisburg and, throughout his career of more than 40 years, was employed by Harrisburg Hospital, Holy Spirit Hospital, Carlisle Hospital, and the Milton S. Hershey Medical Center. He was chairman of the departments of neurosurgery at two of those organizations and also served as president of the medical staff at Holy Spirit.

He recently retired from practicing neurosurgery at PinnacleHealth Neurosurgery and Neuroscience Institute, where he specialized in brain surgeries and spine surgery. During this time, he also provided coverage for neurosurgical emergencies at the Harrisburg Hospital Emergency Department and the Intensive Care Unit for 24 hours a day, 365 days a year.

“On a rainy day in October I drove to Baltimore to see Juniata play Johns Hopkins in football,” says Tom Congersky, a member of the Juniata Class of 1963 who nominated Dr. Moore for the Alumni Achievement Award. “There standing along the fence, watching the game in a downpour, was Barry. He once told me he studied medicine at the Mayo Clinic, but the only institution he contributed to and supports is Juniata. Now, since his retirement, he is able to attend many games and activities that work prevented him from doing earlier.”

At the Alumni Awards Assembly, Dr. Moore shared further his belief in Juniata.

“Since I left Juniata 55 years ago, there have been a lot of physical changes on campus—a lot of new buildings and facilities,” Dr. Moore says. “However, the one thing thing that never changes at Juniata is the way in which they prepare their students for not only their chosen profession in life, but for life’s challenges after graduation.”

Originally from Middletown, Pa., Dr. Carl A. Kihm, a 2005 graduate of Juniata, earned the College’s Young Alumni Achievement Award, which honors an alumna/us not more than 15 years out from graduation who has distinguished his/herself in their chosen profession. After completing his bachelor’s degree at Juniata, Kihm earned his doctorate in podiatric medicine at Temple University School of Podiatric Medicine, completed a residency at DeKalb Medical Center and went into private practice with Village Podiatry Group in Atlanta, Ga. He is now an associate at University Foot & Ankle in Louisville, Ky., and a faculty member at The Podiatry Institute in Decatur, Ga. He is also a fellow at the American College of Foot and Ankle Surgeons, is a diplomat at the American Board of Foot and Ankle Surgery and holds podiatry certifications in Kentucky, Indiana and Georgia.

In 2011, Kihm traveled to the Nepal Orthopedic Hospital (NOH) in Kathmandu to operate on patients on a medical mission trip. Within the next few years, he would operate on these patients by flashlight, teach and collaborate with Nepalese doctors and procure donations for the hospital. He eventually became a co-leader of the trip, working through the Healing the Children nonprofit organization. After a 2015 earthquake killed more than 8,000 people in Nepal, Kihm worked with MedShare to send 1,000 boxes of medical supplies to NOH. For this work, Kihm was awarded MedShare’s Community Hero Award. In 2016, he was featured for “Healing the Children in Nepal” on NBC’s The Doctors television show.

In 2017 and 2018, Kihm traveled to San Lucas Toliman, Guatemala, where he performed approximately 30 surgeries in five days. He continues to bring his leadership not only through service but also by working as an attending surgeon for residents of Norton Healthcare’s Kentucky Podiatric Residency Program in Louisville, Ky.

“Juniata helped me to develop into a forever student, a critical thinker, a well-rounded individual. Compassionate and passionate. Creative and accepting of all people,” Dr. Kihm says. “My professors—many of whom are the most brilliant minds I’ve ever met—always challenged us not just to learn facts verbatim, but to think and to educate ourselves beyond what we could learn in a textbook through experience.”

Jean (Davies) Ewers, a 1961 graduate of the College, was presented with the William E. Swigart Alumni Humanitarian Award, which honors an alumna/us who, through vocation or avocation has exercised leadership or sacrifice to improve the lives of others. Ewers was presented with the award for her work as a leader of the Honduras Hope Mission, which travels to Honduras annually to care for the 30 poorest families in the La Villa community. After retiring from a career teaching fourth grade at Mars Area School District, Ewers was looking to continue her legacy of empowering children and families. Through her church, she found the Honduras Mission, which helps community members there, who are underpaid workers that harvest nearby plantations which grow watermelons, bananas or sugarcane. Ewers traveled to Honduras several years, helping the Mission distribute 1,500 packets of parasite medicine, 242 water filters, 200 bibles, 130 pairs of shoes, 100 mosquito nets, 50 pairs of reading glasses and two large cases of medications.

Within this mission, Ewers helped establish and coordinate the HOPE family program, which supports and empowers the Honduras HOPE families. In addition to fundraising in the U.S., Ewers worked directly with families in Honduras to identify their greatest needs and address those challenges to move families toward independence. She helped families obtain and care for school uniforms so children could attend school, ensured families could gain access to clean water, and worked to empower women to start small businesses selling food, sewing or cosmetology. Many HOPE families were young single mothers who did not know one another, so Ewers brought them together for meals, worship and training in medical and life skills, creating a caring and supportive community that lasts long after a family graduates from the HOPE program. Honduras HOPE has inspired at least one student to attend university and another to start a small water filter business, maintaining filters by helping with usage and replacing parts. Ewers’ fundraising for HOPE enabled the program to hire a Honduran couple who works with families throughout the year.

Although she no longer travels to Honduras, Ewers continues as a board member for the mission, in addition to shepherding a Ugandan family whose children are empowered because of her care. She also serves as a Stephen Ministry leader.

“My four years spent at Juniata developed my skills as a teacher and community leader and reinforced in me that a successful life is not judged by the money you make or the titles you obtain but by the lives that you touch, embrace, and enhance,” Ewers says.

David G. Oliver, a graduate of the Juniata class of 1963, was presented with the Harold B. Brumbaugh Alumni Service Award, which honors an alumna/us who has shown, above all others, as having given of his/her time to projects or functions to advance Juniata College.

After starting his career in education in the Middlesex Borough School District in New Jersey, David’s service to Juniata began to take shape when he began attending and planning regional alumni events near his home in New Jersey. Since that time, he has become a regular attendee of on-campus events like Alumni Weekend and Homecoming and Family Weekend, where he has been and continues to serve as a long-time member of the Class of 1963’s reunion committee. Oliver is renowned among his classmates for maintaining the close bonds of his class by writing newsletters, emails and letters.

A captain of the football team while he attended Juniata, Oliver has carried his commitment to athletics into lifelong fandom, and is a supporter of not only Juniata’s football team, but athletics at large as well. He and his wife were charter members of the College’s J-Club athletics fund.

In addition to serving on Alumni Council, to which he was elected President, Oliver also lent his leadership to various fundraising efforts. From the Kennedy Sports and Recreation Center to Founders Hall and Winton Hill, Oliver has had a positive influence on philanthropy to Juniata. He has served as a Class Fund Agent, often helping to inspire more than 50 percent of his classmates to give to Juniata, and chaired his class’s 50th reunion, which raised a record $1.4 million in scholarship funds for first-generation students attending the College.

Together with his wife, Marion, Oliver is leaving a legacy gift to the music program at Juniata.

“When traveling with Dave, someone in the group must wear something JC to ‘represent’ and we have run into many people connected with Juniata that way,” says Tom Congersky, one of several of Oliver’s classmates who nominated him for the award.

At the Alumni Awards Assembly, Oliver reflected on the value of his liberal arts education from Juniata, saying, “When you get a degree, you’re never really sure you’ve learned much of anything. And yet, over the years, looking back, we learned so much about life. We learned to think. We were given the opportunity to lead. We knew how to commit to things and we knew how to take chances. I’m very proud to be a Juniata alum.”