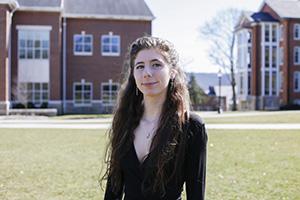 Huntingdon, Pa. – Audrey Kulberg, a Juniata College junior from Tinton Falls, N.J., who studies international politics, was recently awarded a fellowship from the James A. Finnegan Foundation. Because of this fellowship, Kulberg will participate in a 10-week, paid internship this summer at an executive agency yet to be decided.

“I’ve been interested in the field of international politics since I was 13 years old,” says Kulberg. “I am motivated to pursue a career in which I could enact change that would help give girls around the world a better education.”

Kulberg initially learned about the Finnegan Fellowship through Emil Nagengast, professor of politics and international studies at the College, and Lyvia Toth, a junior at the College from Loretto, Pa., who was awarded the fellowship last spring.

In addition to Nagengast, Kulberg received guidance on her application from Dennis Plane, professor of politics and chair of the department of politics at Juniata, and Deborah Roney, assistant professor of English and director of Language in Motion at the College.

“They were all so supportive in my applying for the program, and I am very grateful to have them as advisers and mentors,” says Kulberg.

Fellowship recipients were chosen by a panel of distinguished judges, under supervision of the Board of the Finnegan Foundation. Students were judged based on background, civic endeavors, career interests and a prompted political science essay.

Finnegan Fellowships are named for the late James A. Finnegan, Secretary of Pennsylvania from 1955 to 1958, and other men and women who have made important contributions to the “art of government” in Pennsylvania. The foundation was established in 1960 and fellowships have been awarded ever since.

Kulberg was recognized at an awards luncheon for fellowship recipients on Friday, March 22 in the Governor’s residence in Harrisburg. On campus, Kulberg is the president of the Juniata Democrats student organization, a member of the Student Government Projects Committee, a student assistant in technical services in the library and an English as a Second Language tutor.