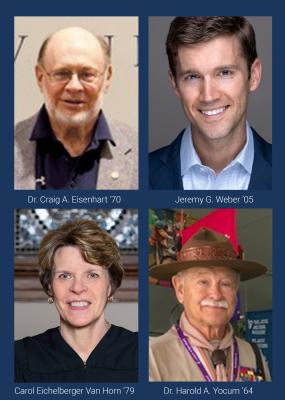 HUNTINGDON, Pa. – Juniata College’s mission is to empower students to lead a fulfilling life of service and ethical leadership in the global community following their graduation. Four distinguished alumni who live that mission were honored recently with awards recognizing their outstanding achievements and service.

A 1979 graduate of Juniata, Carol Eichelberger Van Horn, received the College’s Alumni Achievement Award, which honors those who have distinguished themselves over a period of years and who have achieved a pinnacle position in their chosen profession.

In 1999, Van Horn was elected to serve on the bench for the 39th Judicial District, which encompasses both Franklin and Fulton counties. She was retained for a second 10-year term in 2009, becoming President Judge in 2015. She spearheaded the effort to establish a treatment court for those with opioid dependency issues involved in the criminal justice system in Franklin County. Carol presided over Good Wolf Treatment Court from its beginning in April 2017 through her retirement in January 2020. She currently serves as a Senior Judge, eligible for assignments by the Pennsylvania Supreme Court across the Commonwealth of Pennsylvania.

Following her appointment by former Gov. Ed Rendell in 2009, Carol served as a member of the Juvenile Justice Delinquency Prevention Committee as part of the Pennsylvania Commission on Crime and Delinquency for 12 years. She was appointed by former Gov. Tom Corbett to serve on the Juvenile Court Judges’ Commission (JCJC) in 2012 and was Vice-Chair when her term ended in 2021.

She served as a lecturer and panelist for the Pennsylvania Bar Institute in areas involving family law, estate administration, and juvenile court. She chaired the JCJC’s Juvenile Delinquency Benchmark Committee from 2016-2019, overseeing the revision of this resource for all Common Pleas judges. Van Horn served on the Domestic Relations Procedural Rules Committee from 2011-2015 upon appointment by the Pennsylvania Supreme Court. She had previously served on the State Roundtable dealing with dependency issues in juvenile matters and was a member of its Dependency Benchmark Committee.

Van Horn was recognized with the Judge Richard J. Walsh Criminal Justice Advisory Board (CJAB) Award in 2019 as chair of Franklin County’s CJAB from 2015-2019. She was the recipient of the Sylvia H. Rambo Award from the Penn State Dickinson School of Law in 2010, the Chambersburg YMCA Lifetime Achievement Award in 2008, the Franklin County Athena Award in 1999, the Chambersburg 2000 Partnership Award in 1998, and the “Women on the Move” award given by the Hagerstown Publishing Company in 1994.

A 2005 graduate of Juniata, Jeremy G. Weber earned the College’s Young Alumni Achievement Award, which honors those who have distinguished themselves in their chosen profession during the first 15 years since graduation from Juniata College.

Weber has worked for the White House Council of Economic Advisers, where he was the chief economist for energy policy and senior adviser to the Council. During that time, Weber led the development of several White House reports and chapters of the Economic Report of the President. Prior to the White House and the University of Pittsburgh, he worked as a research economist at the USDA Economic Research Service, a consultant for the World Bank, and an adjunct professor at Johns Hopkins University.

He has performed extensive research in the areas of energy and natural resources, the environment, growth and development, and agriculture, publishing more than 30 articles or book chapters that have received more than 2,300 citations as a whole, as well as national and international media attention. His honors include serving as a Fulbright Scholar in Peru, receiving the doctoral dissertation award at the University of Wisconsin, and being selected to serve at the National Academy of Sciences Committee on National Statistics. One of his papers was selected as the outstanding article of the year for the journal Applied Economic Perspectives and Policy; another was selected as the best working paper of the year by the US Association for Energy Economics. More recently, his statistical analysis of oil and gas well reclamation projects was the basis for legal action by the Sierra Club in Pennsylvania. Drawing on his extensive statistics and policy experience, he is currently working on a book about using statistics in policy making.

Dr. Harold A. Yocum, a 1964 graduate of the College, was presented with the William E. Swigart Alumni Humanitarian Award, which honors those who have improved the lives of others through personal sacrifice and have exercised significant leadership through vocation or avocation. Yocum was presented with the award for his selfless service to his community and beyond through his significant civic, military, and professional services.

He enlisted in the U.S. Army Reserve as a Reserve Commissioned 2nd Lieutenant Nov. 7, 1968. He was promoted to Captain Aug. 20, 1970, upon his entry to active duty; to Major May 31, 1972; to Lieutenant Colonel May 31, 1977; and to Colonel Aug. 16, 1986. Dr. Yocum retired from military service Jan. 1, 1992, after serving 27 years. He has received the Meritorious Service Award with oak leaf cluster, the Reserve Component Achievement Medal, the National Defense Service Medal, the Armed Forces Reserve Medal with 20-year device, the Army Service Ribbon, and the Overseas Service Ribbon with two-year device.

A 62-year veteran of the Boy Scouts of America (BSA), Dr. Yocum first joined scouting as a teen in 1958. He currently serves on the Last Frontier Council Executive Board in Oklahoma as a member at large and as the council’s International Scouting Representative. He is also a member of the BSA National Religious Relationships Committee as a representative of the Unitarian Universalist Faith Group. He teaches several merit badges as a merit badge counselor and portrays Lord Baden-Powell, the founder of scouting at many scouting events.

Dr. Craig A. Eisenhart, a 1970 graduate of Juniata, was presented with the Harold B. Brumbaugh Alumni Service Award, which honors those who have distinguished themselves above others as having given their time to projects or functions of an elected or appointed position for the advancement of Juniata College.

Dr. Eisenhart has provided selfless and unwavering service and support to his alma mater with contagious energy and loyalty. While continuing his training in dental medicine after graduation from Juniata, he began what would become a lifetime commitment to the Class of 1970 reunion committee. In the years since, he has often hosted reunion gatherings at his home. Dr. Eisenhart has also served as a Class Fund Agent and a member of the Class of 1970 Legacy Committee for his 50th Reunion.

Throughout many years of involvement, he has served on the Alumni Council, led the JClub as President, and participated in the selection committee for the Juniata Sports Hall of Fame. He has mentored and encouraged students in the Health Professions, participated in Juniata Career Day, written medical school recommendation letters, and hosted interns in his dental practice.

In addition to the role he played with his classmates, Dr. Eisenhart has also lent his leadership to a variety of fundraising efforts including the President’s Development Council, Century II Campaign, and many Annual Giving phone-a-thons. He and his wife, Patricia Burkhart Eisenhart ’69, have had a meaningful impact on philanthropy at Juniata through their contributions to improve academic facilities such as the Brumbaugh Academic Center and Statton Learning Commons. They have initiated the Robert L. Fisher Legacy Scholarship and the J. Henry Eisenhart Memorial Endowed Scholarship, supported the baseball program, and funded improvements to the College’s baseball facilities, all on the way to becoming Quinter Lifetime Benefactors.

One of his greatest gifts to Juniata has been his steadfast commitment to the baseball program. He has been a volunteer coach since 1989 and still serves in this role. Dr. Eisenhart has logged thousands of hours as a constant presence on and off the field. He has rarely missed a practice or game, has accompanied the team to spring training, has served as interim co-head coach during a time of need, and has forged lifelong relationships with many of the student athletes he has mentored.