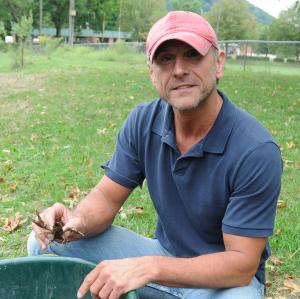 HUNTINGDON, Pa. — To gain a better understanding of the population of invasive rusty crayfish inhabiting the upper Juniata River watershed, a group of Juniata College students and faculty began to collect samples for study in 2016 and 2017.

They quickly realized they had a mystery to solve, the details of which will appear in an upcoming issue of the Journal of Crustacean Biology. George Merovich, associate professor of environmental science, Vincent Buonaccorrsi, professor of biology, Madison Hearn ’19, and Nicholas Smith ’21, co-authored the paper, “Hybridization between two introduced, invasive crayfish species in the upper Juniata River system, Pennsylvania, USA.”

“We were interested in identifying species living in the water for the main purpose of categorizing the health of the streams and identifying threats. We needed to know what kind of crayfish they were, so we tried to identify them using the published identification keys available,” says Merovich. “I’m not a crayfish biologist, so I was going through the keys along with the students. They were not matching up with the characteristics in the keys.”

The rusty crayfish, native to the Ohio River basin, is a well-known invasive species outside of its natural habitat.

“Rusty crayfish have been here a long time. You can still find the Appalachian brook crayfish, but they are restricted to the headwater reaches of the watershed,” says Merovich. “It’s hard to know for sure, but they were likely introduced via anglers releasing their bait. Crayfish are popular for bait.”

The samples resembled the rusty crayfish, but not entirely, piquing curiosity and vexation among the student researchers.

“It’s science. It’s frustrating and exciting at the same time. It’s a challenge,” he says. “It was a good learning experience. When you are trying to identify things with a key, it’s supposed to work out. It was a good experience to understand that nature is not always going to follow our books. After the samples didn’t match the key, we started to brainstorm the idea of hybridization, which was exciting as we began to study the genetics and morphology.”

The samples also were in no way similar to the Appalachian brook crayfish, native to the area and belonging to a completely different genus.

“These had characteristics mixed between two different species. That led us to ask, ‘Are these possibly hybrids?’ We know hybridization exists in nature,” Merovich says. “We found literature that indicated crayfish—especially the rusty crayfish—can hybridize with other species within the same genus.”

The possibility of a previously-unknown hybrid inspired Merovich to write a proposal seeking funding for further study.

With no known evidence of the Appalachian brook crayfish hybridizing, the Juniata researchers turned their attention to another invasive crayfish species found in local streams and rivers—the Allegheny crayfish.

The Allegheny crayfish was likely introduced much the same way as the rusty crayfish, and, as the two belong to the same genus, interbreeding took place between the two populations within their adopted habitat.

Introduced species become invasive when they outcompete other species in the ecosystem and spread in what seems to be an uncontrolled fashion. The species may not be harmful in its own habitat, but once relocated, the traits that allowed it to survive may enable it to cause a great deal of environmental damage.

“It’s evolutionary history. One species may have traits that allow it to outcompete other species,” Merovich says. “The rusty crayfish pretty much mow down aquatic vegetation, eat fish eggs, and disturb the sediment. They cause all kinds of issues. They tend to wipe out native species and take over the area.”

Unlike the rusty crayfish, the Allegheny crayfish, while invasive, does not seem to be as aggressive. The rusty/Allegheny crosses are fertile but require more research to determine how they will interact with their environment.

“We’ve only come across a few individuals that were the progeny of hybrids backcrossed to rusty crayfish. Thus far, we have not found hybrids backcrossing with the Alleghenys,” he says. “We need to do a lot more studies to elucidate the ecological consequences.”

“You can sit and read a book or sit in a lecture, but the best way to learn is to do it from start to finish—collect the data, measure the critters, do the analysis, figure it out, and write it up,” Merovich says. “The whole process is the best learning experience there could be. This is how we gain our information, a combination between teaching and research.”