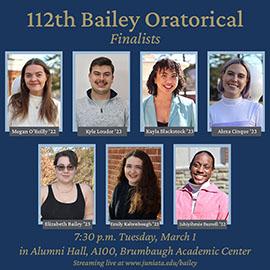 HUNTINGDON, Pa. – The 112th Bailey Oratorical speech competition, a campus tradition that annually draws insightful and compelling discourse from Juniata students, will be held at 7:30 p.m. Tuesday, March 1, in Alumni Hall, A100, in Brumbaugh Academic Center, and can be viewed at www.juniata.edu/bailey.

This year, the prompt for speeches is, “Who would you have chosen for the person of the year in 2021 and why?”.

Established in 1910, the Bailey Oratorical encourages students from all areas of study to present six to eight-minute persuasive speeches on a topic that changes annually. This year’s prompt was inspired by TIME Magazine’s annual “Person of the Year” feature, a fixture since 1927, which asks who “for better or worse has most influenced events in the preceding year.”

Students first sign up for preliminary rounds of the competition, which took place on February 19, with three Juniata alumni serving as judges. Nathaniel “Nate” Ulrich ’19, Julia Bogue ’10, and Chelsea Scafuro ’18 had the responsibility of choosing the seven finalists of the competition. The finalists are Elizabeth Bailey ’23, Kayla Blackstock ’23, Ishiyihmie Burrell ’22, Alexa Cinque ’23, Emily Kaltenbaugh ’22, Kyle Louder ’23, and Megan O’Reilly ’22.

Student finalists who advance to the final round are coached by faculty mentors to polish content and deliver their speeches in preparation for the final round of the competition.

Judges for the final competition include Corey Lacey ’14, who is the social media coordinator at the Fashion Institute of Technology (FIT), working as a member of the media and public relations team in partnership with the digital team; Chris Ortiz, who is the program director for the Team Development Center at Shaver’s Creek Environmental Center and an instructor for the Recreation Parks and Tourism Management Department at Penn State University; and Jenny Wang ’12, who is a vice president at Clyde Group, where she leads a seven-figure Fortune 75 pharma account engaging in DEI and Health Equity communication support.

The competition features prizes of $1,000, $500, and $300 for the top three speeches. Audience members are encouraged to participate in a text-to-vote poll for the People’s Choice Award.

The oratorical contest has a long tradition at Juniata College, as students from all areas of study can compete for the monetary prize. The original prize for the contest was $15 and $25. An enhanced endowment contribution by Judge Bailey's son-in-law Colonel Sedgley Thornbury provides the contest’s prize money. In addition, the name of the winner will be permanently inscribed on an antique loving cup presented to the college by Colonel Thornbury's son, Thomas Bailey Thornbury.