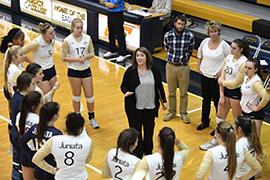 “Title IX is a law that prohibits discrimination by sex in participation in the educational enterprise as it relates to athletics,” said Vice President for Student Life and Dean of Students Matthew Damschroder, who is Juniata’s Title IX Coordinator. “At that time, in 1972, support for and participation in women’s athletics was substantially lower compared to boys’ and men’s athletics. By exclusion, girls and women were missing out on the benefits of athletics, which are substantial.”

Through competition and physical training, student-athletes hone skills that will serve themselves and others throughout their lives, including leadership, communication, strategy, and problem-solving.

“For women, playing sports is especially impactful for building confidence and preparing for the future,” said Head Women’s Volleyball Coach Heather Pavlik ’95, who was a student-athlete at Juniata and a member of a national championship volleyball team. “There are lessons learned between the lines, on the court, or on the field that aren’t taught in other parts of life. This is an important space where growth occurs.”

The importance of Title IX and the positive impact the legislation has had on the lives of student-athletes cannot be understated.

“The amount of benefit Title IX has had is hard to put into words. It shaped who I am and who I have become,” Pavlik said. “It allowed me to learn balance as a student and an athlete, it gave me confidence going out into the world, it taught me how to deal with adversity.”

She pointed out that circumstances rarely go exactly as planned in sports, and that the critical ability to shift gears, problem solve, and overcome is a skill that can apply to all areas of life.

“Generations of our students have been propelled from participation in our programs to exceptional outcomes,” said Damschroder.

Juniata had a well-established tradition of supporting women’s athletics, with the organization of the Women’s Athletic Association in 1938 with the motto, “A sport for every girl, and a girl for every sport.” Even so, most teams had intramural status due to a lack of intercollegiate competitors.

Title IX was signed into law by former President Richard Nixon, expanding upon the Civil Rights Act of 1964 by including the prohibition of discrimination within educational programs receiving federal funding.

“Title IX became the vehicle by which institutions were expected and required to advance women’s opportunities in athletics,” Damschroder said. “It is measured across three areas of compliance—programs must be proportional to the population, institutional resources committed to athletics must equally support men’s and women’s teams, and programs should aim to grow participation and ameliorate gaps in equity.”

“We’ve done a lot of expansion and have met all of the offerings within the Landmark Conference,” said Damschroder. “Our goal would be to continue to provide the best educational opportunities to students who are also talented and excel in sports. We see athletics as a path to growth and development and a way for individuals to advance to lives of meaning and purpose.”