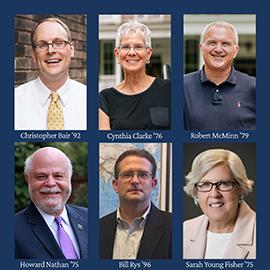 Christopher Bair, managing director at Deloitte, earned a bachelor’s degree in computer science and business management from Juniata College in 1992 and a master’s degree in business administration at Lebanon Valley College in 2000. He began his career as a systems analyst at Tyco Electronics/Amp Incorporated. Bair has been with Deloitte since 2000 and has worked at locations in Harrisburg, Pa., Atlanta, Ga., and Denver, Co.

She is a past president and secretary of the Huntingdon Rotary Club and currently serves as the chair of the Landscape Committee at Stone Church of the Brethren. Clarke is a member of the Class of 1976 Reunion Committee and serves on the Alumni Council.

McMinn is a member and past president of Huntingdon Rotary Club. He has previously served as a Juniata College trustee, is a board member of the Jana Marie Foundation, and is finance chair and a leadership team member of the Stone Church of the Brethren, Huntingdon, Pa.

Howard Nathan, executive director of the Gift of Life Transplant Foundation, graduated from Juniata in 1975 with a bachelor’s degree in biology. He studied epidemiology at University of Pennsylvania and clinical microbiology at the University of Pittsburgh. Nathan began his career as senior transplant coordinator at the Delaware Valley Transplant Program in 1978. He retired as president and CEO of Gift of Life Donor Program in 2022, a position he had held since 1984. Nathan received a Doctorate of Honorary Letters in 2021 at Juniata.

Bill Rys, managing director and head of federal government affairs at Citi, earned his bachelor’s degree in pollical science and government at Juniata in 1996. He graduated from Boston University School of Law in 1999 with his juris doctor degree and earned his master’s degree in tax law and taxation at Georgetown University Law Center in 2011. Rys began his career as a legislative assistant at the U.S. House of Representatives in 2000 and served as deputy executive secretary at the U.S. Department of the Treasury in 2007.

She is the author of four books relating to individual investment strategy.