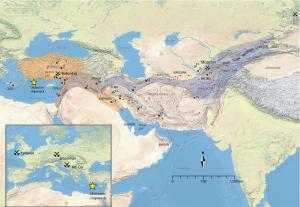 HUNTINGDON, Pa.—The captain tracked turbid clouds gathering above the roiling seas. Timbers groaned, and sailors shouted, scrambling across the heaving deck in a futile effort to reach the safety of a cove along the Uluburun peninsula.

The shipwreck dating to the 14th century B.C. was rediscovered off the coast of modern-day Turkey in 1982, along with a wealth of information for a research team of geologists, anthropologists, archaeologists, linguists, geographers, and historians.

“When I first saw pictures of the ship, I saw it as an amazing opportunity to use my isotope science to trace metal sources,” said Juniata College professor of geology Ryan Mathur, a member of the team that co-authored, “Tin from Uluburun shipwreck shows small-scale commodity exchange fueled continental tin supply across Late Bronze Age Eurasia,” published in the most recent issue of Science Advances.

The ship was laden in luxury cargo, likely bound for a Mycenaean palace in mainland Greece.

“There were extraordinary things found on the shipwreck, which was porting raw materials, gifts, swords, daggers, metal ingots, and all sorts of semi-precious stones,” said K. Aslihan Yener of Institute for the Study of the Ancient World at New York University (ISAW). “It’s a fabulous discovery.”

Mathur learned of the project from Wayne Powell of Brooklyn College—CUNY, the two of whom had collaborated on tin and bronze studies for a decade.

“I think this has been the most exciting study of my career. The Uluburun shipwreck is iconic,” said Powell. “It’s described in every study or analysis of ancient trade in the Mediterranean and is foundational to our understanding of large-scale commodity trading between the major Bronze Age kingdoms, including Egypt, Mycenae, and the Hittites of Anatolia.”

Powell had been particularly interested in Mathur’s prior work in determining the origin of copper ore through isotopic analysis and if it would translate to tin.

“I had published research on the subject, and getting material like this to test was a really big deal,” Mathur said. “It was an opportunity to use a new technique to measure tin isotopes from a famous site.”

The researchers set out to understand more about the origins of the Uluburun shipwreck’s copper and tin ingots used in manufacturing bronze, a substance upon which empires were built or destroyed.

“We have very belligerent empires and kingdoms, with very complicated trade networks providing essential raw materials for their economies and their ambitions, warring with each other,” Yener said. “Their most vital defense mechanism is bronze weaponry. Tin was essential to making good bronze.”

Evidence of copper mining sites appeared throughout the historical and archaeological records. The origin of the tin was a mystery.

“No one could prove where any of the tin mining was happening. There were ideas there were mines in Turkey; Cornwall, England; Germany; and Tajikistan,” said Mathur. “Cornwall’s mining was huge and, being in the west, a lot of people thought it was the primary source of tin throughout the Bronze Age.”

An alternative hypothesis suggested the tin may have come from the east rather than the west.

“Everyone thought tin came from some exotic place in Central Asia, but the source was never specified,” Yener said. “Tablets that talked about these sources of tin date to a thousand years after tin started to be used in the Middle East,”

The ingots were excavated from the shipwreck site by Cemal Pulak of Texas A&M University, who had maintained the samples for decades. Mathur and Powell requested samples for analysis, and Pulak was glad to oblige.

“Isotopes provide a fingerprint to identify where people mined the metal,” said Mathur. “We’ve studied approximately 1,500 samples (1,000 bronze/tin artifacts and 425 tin ores) from all over the earth, so we can define ranges where the tin might have been mined. We were able to look at samples from all over the place, compare them, and come to a conclusion. It’s like a miracle.”

Two-thirds of the tin ingots came from Turkey, not far from the shipwreck site, despite archaeological evidence that one of the sources of tin, Kestel tin mine, had ceased production hundreds of years earlier. But there were other tin deposits in the Taurus Mountains with evidence of later working. The remainder of the tin was traced to Central Asia, signaling robust trade routes linking Asia and Europe predating the fabled Silk Road by centuries.

“That meant mining switched from an organized, industrial model to small-scale, decentralized mining of stream tin, and this then fed into a central point for processing,” Powell said, describing the method used to retrieve the ore as akin to panning for gold.

Ordinary citizens in areas once considered Bronze Age backwaters, not empires, independently met the demand and dictated the manner of trade.

“As this paper evolved, it reframed the story of what these suppliers of rare resources to major empires of the Mediterranean were like,” said Michael Frachetti of Washington University in St. Louis, Mo.

Each member of the team, Mathur, Frachetti, Powell, Yener, Pulak, H. Arthur Bankoff of Brooklyn College—CUNY, Gojko Barjamovic of Harvard University, Michael Johnson of Stell Environmental Enterprises, Vincent C. Pigott of the University of Pennsylvania Museum, and Michael Price of Santa Fe Institute, contributed a piece of the puzzle to complete an image of prehistoric globalization.

“These were nomads, herders, and communities with different adaptations. They were able to shape the market. These origin sites do not have urban populations and were not dictated by imperial politics,” Frachetti said. “The idea that tin was making its way to the Mediterranean, then smelted into bars, is amazing. Goods were flowing worldwide thousands of years before the modern era.”