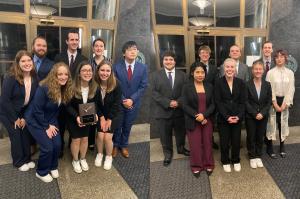 HUNTINGDON, Pa. — Kicking off the spring invitational season, Juniata College’s nationally-ranked Mock Trial Team will travel to the University of California at Irvine on January 7-8, 2023, to argue their case at this prestigious Invitational.

Juniata’s Mock Trial Team, ranked 43rd in the United States by the American Mock Trial Association (AMTA), will take on top-ranked teams from across the country, including University of Chicago, Stanford University, UCLA, and Northwestern University.

“It is significant that Juniata is the only small College participating in this Tournament of large Universities, nine of whom qualified for the National Championship Tournament in 2022, along with Juniata,” noted Juniata College Mock Trial Coach Attorney David Andrews ’74.

In preparation for the competition, the “Legal Eagles” will scrimmage University of Oregon on Jan. 3, 2023, before they depart for California. Thanks to the generous support of Juniata College alumni and trustees, there will be no cost to the Mock Trial team members for travel or lodging for this competition.

Governed by the AMTA, Mock Trial is an academic competition in which students assume the roles of attorneys and witnesses in a trial. Teams compete against other colleges and universities. In competition, each team tries the case four times, twice as prosecution and twice as defense. As part of the Invitational Tournament, competitors will enjoy a break from pleading their case at a Beach Party at Huntington Beach on Saturday night after competing in four trials that day.

All teams are given the same information, and witnesses must stick to the affidavit provided, but the ways different teams interpret the information highlight and challenge each member’s ability to adapt, problem-solve, and think on their feet.

This season’s case concerns an Independence Day plane crash in which a pilot deviated from the planned flight route and crashed into a mountainside. The pilot and a passenger, Morgan Felder, lost their lives in the tragedy. The passenger’s surviving spouse, Ari Felder, brought a negligence lawsuit. The case involves many possible factors for the crash, including pilot error, drug usage, weather, the pilot's medical condition, and even fireworks on the Fourth of July.