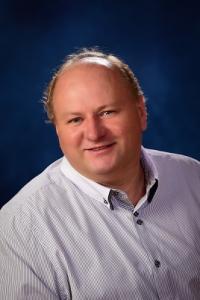 Dr. Peter Baran accepted a position as assistant professor of chemistry on the Juniata faculty in 2004 after working at several academic positions at the University of Puerto Rico in Rio Piedras. At the university, Baran worked as an affiliated researcher from 2003 to 2004 and worked previously as a postdoctoral fellow and visiting assistant professor from 2000 to 2003. Baran graduated from The Slovak Technical University in Bratislava, Slovakia in 1986 where he earned the equivalent of a master's degree in Physical and Analytical Chemistry and a minor degree in pedagogy. He earned a doctoral degree in Inorganic Chemistry from the same university in 1992. He started his career as a research assistant at his alma mater in 1986, interrupted by compulsory military service in the Czechoslovak Army from 1986 to 1987. In 1992, after his Ph.D. thesis defense, Baran was offered a position of assistant professor at the Department of Inorganic Chemistry at The Slovak Technical University and worked there through 1998. In 1998, he quitted his academic position in Bratislava and moved to industry. For almost two years he worked for Amylum Slovakia in Boleraz, where he supervised the instrumental analysis in the Quality assurance laboratory. At the same time he maintained a contact with academia via a part time position at Saints Cyril and Methodius University in Trnava, Slovakia, where he held a research assistant professor position until December 1999. He has studied internationally in Germany, Greece and Puerto Rico. His research interests include chemical synthesis, X-ray crystallography, spectroscopy and magnetochemistry. He has taught courses in general chemistry, inorganic chemistry, solid state chemistry and crystallography. He speaks Slovak, Czech, Russian and English fluently. He has had a variety of professional papers and articles published in publications such as Inorganic Chemistry, the Journal of the American Chemical Society, Angewandte Chemie, Dalton Transactions, the Journal of Organic Chemistry, the Journal of Chemical Crystallography, Polyhedron and many others.