Charles A. Dana Professor of Politics 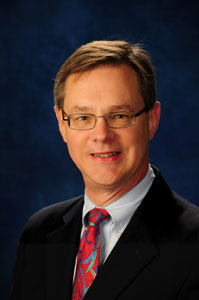 Professor Barlow came to Juniata in 1991 from the Commission on the Bicentennial of the U.S. Constitution in Washington, D.C. where he was associate director for higher education programs and staff historian for the commission chairman, retired Chief Justice Warren E. Burger. He earned his Ph.D. and M.A. in Government from Claremont Graduate School, California, where he was a University Fellow from 1977-80, and his B.A. in Political Science from Carleton College, Northfield, Minnesota. Although his special areas of interest are political philosophy, American political thought, and constitutional law, he has taught a broad range of courses in European and American political thought, including courses in "Shakespeare's Politics" and "Politics in Film." Prof. Barlow received Juniata's Junior Faculty Award for Excellence in Teaching in 1995 and the Beachley Award for Distinguished Academic Service in 2006. He was named Charles A. Dana Professor of Politics in 2007. In 1998-99, Prof. Barlow was a Fulbright Scholar at Brno University of Technology and Masaryk University in Brno, Czech Republic. During 2007-08 he was the Garwood Visiting Fellow in the James Madison Program in American Ideals and Institutions at Princeton University. Prof. Barlow's edition of selected writings by Gouverneur Morris, American statesman, diplomat, and member of the Constitutional Convention, is expected in 2012. He also edited three books commemorating the Bicentennial of the Constitution. His articles and book reviews have appeared in History of Political Thought, Polity, The American Political Science Review, The Review of Politics, Interpretation, The Classical Journal, and other publications. In addition to his teaching at Juniata and his scholarly writing, Professor Barlow has worked extensively with civic education programs in the U.S. and abroad. He is a member of the American Political Science Association and has chaired panels, moderated discussions and presented papers at their annual meetings. His wife Kathleen is a CPA practicing in Huntingdon; they have three children.