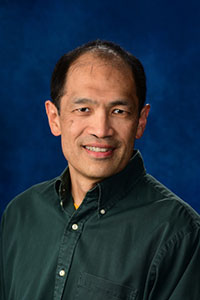 Let me tell you a little bit about myself. I grew up in the suburbs of Chicago, the son of Chinese immigrants. I started at Yale studying biochemistry, but one course during my sophomore year—on modern Chinese history—changed my life and I became a history major. Three summers working as a camp counselor planted the idea of a career in teaching. I then went to the University of Michigan for graduate school and earned my Ph.D. in 1991. I spent two summers during grad school working as a ranger at Klondike Gold Rush National Historical Park (Skagway, Alaska) and Shenandoah National Park (in Virginia). Those experiences profoundly shaped the way I teach.

I have been at Juniata since 1991 and have taught a variety of courses: broad surveys of U.S. history as well as more-specialized courses on the American Revolution, environmental history, early North America, and terrorism. I also enjoy teaching with colleagues in other departments; they have included the choir director (on music in the Civil Rights Movement) and a biologist (on comics in American culture). Furthermore, I enjoy teaching First Year Composition, in part because I get to work with students I don’t usually see in my other courses.

My early research and writing examined stereotypes of Appalachian Mountain people. More recently, I have focused on the environmental history of the American Revolution. I’m writing a book tentatively titled The Military Metabolism of the American Revolution. Armed forces needed energy—food, fuel, work animals, food for those animals, and so on—to operate, and all of that energy came from the environment. How did those armed forces get that energy and use it? The answers to that question help us understand the course of the War of Independence, the lives of soldiers and civilians, and the role the natural world played at that time and during the centuries that followed.

When I have some spare time, I like to run on local trails, read all sorts of books, root for the Chicago Bears and Cubs, pull out a favorite movie (like Raiders of the Lost Ark), devour my wife Rachel’s amazing desserts (lemon pound cake!), and keep up with my awesome kids, Benjamin and Rebecca.