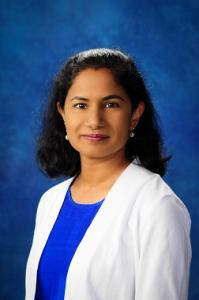 Uma Ramakrishnan joined the Juniata faculty in 2005 as assistant professor of environmental science and studies. She earned a bachelor's degree in chemistry, zoology and environmental science in 1988 from St. Joseph's College in Bangalore, India. She went on to earn a master's degree in ecology in 1990 from Pondicherry University in Pondicherry, India. Her 1998 doctoral degree in ecology comes from the University of California, Davis, where her research focused on predator avoidance behavior in bonnet macaques (a species of Asian monkey).

Ramakrishnan comes to Juniata from the Connecticut Agricultural Experiment Station, where she was chief deer research biologist from 2000 to 2005. Her research, which she will continue at Juniata, focuses male deer reproductive control. She also has studied deer-vehicle collisions and how collision frequency in male deer varies greatly according to season, as well as home-range use in suburban areas.

After completing her master's degree at Pondicherry University, Ramakrishnan worked as a conservation biologist from 1990 to 1994 at the Asian Elephant Conservation Center, International Union for the Conservation of Nature in Bangalore, India.

Ramakrishnan has been very active as an outreach educator during her stint at the Connecticut facility. She has lectured on deer management issues to the Audubon Society, the Future Farmers of America, commercial landscapers, nursery professionals and vegetable and fruit growers. She also has started a deer management workshop at Juniata College. She also has been interviewed about deer management in a wide variety of media, including NPR and the New York Times.

She received the Pro Femina Research Award for Women Scholars in 1998 from the University of California, Davis. She is married to Neil Pelkey, assistant professor of environmental science.