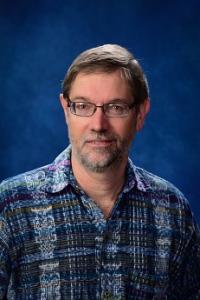 Professor Thurston-Griswold completed a B.A. (summa cum laude) in music and Spanish secondary education from the State University of New York at Cortland, and an M.A. and Ph.D. in Hispanic literature from The University of Texas at Austin. He has been an instructor and lecturer in Spanish at several U.S. universities and an English as a Foreign Language teacher and guidance counselor at the Colegio Metodista, a private school in San Jose, Costa Rica. His areas of expertise include Spanish and Spanish-American literature, Spanish civilization and culture, and Spanish language pedagogy. A member of various professional organizations, he has published articles in journals such as Hispania, Latin American Literary Review, Revista Iberoamericana, and Hispanic Journal and has delivered papers at a variety of conferences. In recent years, he has developed materials and presented workshops on the uses of Hispanic music in the Spanish classroom to build language and cultural proficiency. He has received numerous awards, including a fellowship and publication grant for his dissertation, titled El idealismo sintetico de don Juan Valera: Teori­a y practica. (Maryland: Scripta Humanistica, 1990). In 2003, he received the Beeghly Award for Distinguished Teaching, which is awarded annually at Juniata to a senior faculty member in recognition of teaching excellence. He has participated in and led service learning trips to Mexico, Guatemala, Nicaragua, Costa Rica, Puerto Rico, the Dominican Republic, El Salvador, and Honduras. In the summer of 1997 he led a group of 15 secondary and post-secondary educators to Costa Rica as the project director for a 4-week Fulbright Group Travel Seminar titled "Culture, Ecology, and Democracy in Costa Rica." In the spring semester of 1998, he participated in a faculty exchange at Universidad San Francisco de Quito (Ecuador), where he taught two Spanish literature courses for Ecuadorian students and an Advanced Spanish Grammar course for international students. He spent his first sabbatical during the spring of 2001 conducting research in Spain's National Library on the topic "Ideological and Aesthetic Shift in Fin de Siglo Spain (1890-1905)," his second sabbatical in Guatemala during the 2007-08 academic year researching and writing on Guatemalan testimonial narrative, and his third sabbatical in the spring of 2015 included six weeks in Spain visiting Juniata's exchange programs in Valladolid, Barcelona, and Seville, and presenting a workshop on music as an instructional resource for the Spanish faculty at Universidad Pablo de Olavide in Seville.

As an advocate for peace and justice in developing Latin American nations, he has arranged a wide variety of programs that examine these issues for the Juniata and Huntingdon communities. In 1998 he initiated and continues to coordinate a partnership that seeks to foster a relationship of mutual understanding and support among various organizations in Huntingdon, Pennsylvania, and Quetzaltenango (Xela), Guatemala. Since the summer of 2002, he has organized many delegations and service learning trips to the country, most recently the Juniata Concert Choir's 2013 spring break tour, medical and educational delegations to the Asturias Academy during the summers of 2014, 2016 and 2018, and a new team-taught interdisciplinary colloquium for the Pennsylvania Consortium for the Liberal Arts titled Spanish and Service Learning in Guatemala.  This course was one of six programs selected nationwide by the American Council on the Teaching of Foreign Languages (ACTFL) in 2017 for a Global Engagement Initiative Award. Henry and his wife Joanne, a former school psychologist who currently teaches second and third graders at the State College Friends School, have two children: Will, who was born in January 1997; and Kate, who arrived on the scene in March of 1999. When he is not teaching or parenting, he enjoys distance running, playing the piano and guitar, and singing in choral ensembles.