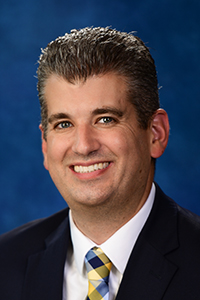 Jason came to Juniata College and Huntingdon, Pa in May 2019.  Prior to Juniata, he served as dean of enrollment at Plymouth State University, leading a team that helped the university increase undergraduate enrollment by 2.35 percent and graduate enrollments by 2.5 percent from 2017 to 2018. Serving as a member of the President’s Cabinet at Plymouth State, Jason set strategy and oversaw operations in undergraduate admission, international admission, graduate admission, financial aid, student success/first-year student advising, new student orientation, the registrar, and veteran services.

Prior to his role at Plymouth State, Jason worked for 12 years in admissions at Lycoming College in Williamsport, Pa where he began as an admissions counselor in 2004 and ascended to the position of director of admissions by 2011, which he held for five years. While at Lycoming, he helped to recruit and enroll the two largest new student classes in the college’s history and participated in creating and executing strategies that led the college to enroll the most diverse class in its history to that point.

Jason earned a bachelor of arts degree in corporate communication from Lycoming College in 2004 and a master of science in education from Bucknell University. He and his wife, Amy, are parents to two children, son Gavin and daughter Chesney and they reside in Huntingdon.